Here is a list of categories associated with this hymn!
Closing Hymns 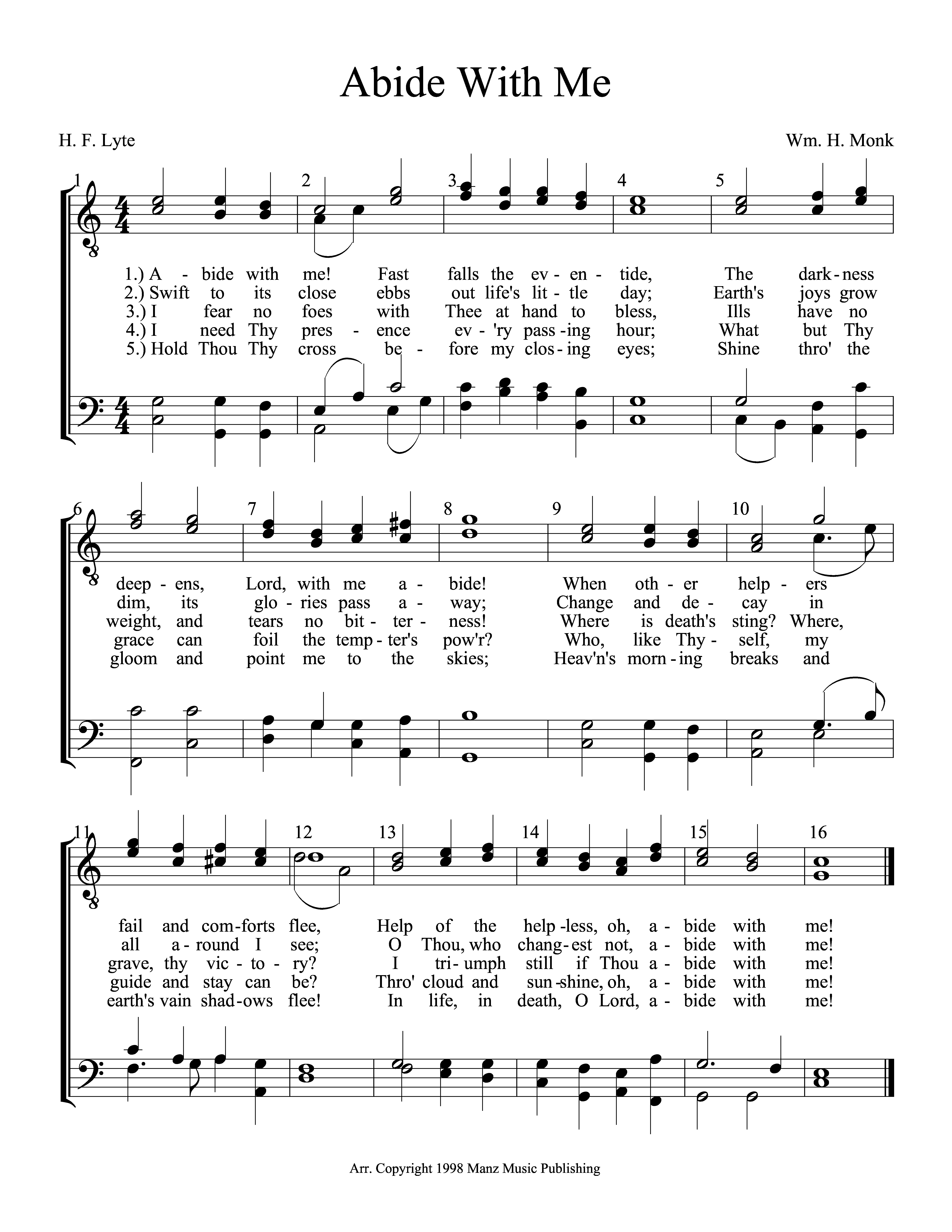 Back to the list
Author
Henry France Lyte in 1847

Youth and education
Henry Francis Lyte was the second son of Thomas and Anna Maria (née Oliver) Lyte, whose family came originally from Lytes Cary Manor. He was born at Ednam, near Kelso, Scotland. Lyte's father was described as a "ne-er do-well ... more interested in fishing and shooting than in facing up to his family responsibilities". He deserted the family shortly after making arrangements for his two oldest sons to attend Portora Royal School in Enniskillen, County Fermanagh, in Ulster; and Anna moved to London, where both she and her youngest son died.

The headmaster at Portora, Dr Robert Burrowes, recognised Henry Lyte's ability, paid the boy’s fees, and "welcomed him into his own family during the holidays." Lyte was effectively an adopted son.

Religious conversion
After studying at Trinity College, Dublin, and with very limited training for the ministry, Lyte took Anglican holy orders in 1815, and for some time he held a curacy in Taghmon near Wexford. Lyte's "sense of vocation was vague at this early stage. Perhaps he felt an indefinable desire to do something good in life." However, in about 1816, Lyte experienced an evangelical conversion. In attendance on a dying priest, the latter convinced Lyte that both had earlier been mistaken in not having taken the Epistles of St. Paul "in their plain and literal sense." Lyte began to study the Bible "and preach in another manner," following the example of four or five local clergymen whom he had previously laughed at and considered "enthusiastic rhapsodists."

Early career and marriage
In 1817 Lyte became a curate in Marazion, Cornwall, and there met and married Anne Maxwell, daughter of a well-known Scottish-Irish family. She was 31, seven years older than her husband and a "keen Methodist." Furthermore, she "could not match her husband's good looks and personal charm." Nevertheless, the marriage was happy and successful. Anne eventually made Lyte's situation more comfortable by contributing her family fortune, and she was an excellent manager of the house and finances. They had two daughters and three sons, one of whom was the chemist and photographer Farnham Maxwell-Lyte. A grandson was the well known historian Sir Henry Churchill Maxwell-Lyte.

From 1820 to 1822 the Lytes lived in Sway, Hampshire. Itself only five miles (8 km) from the sea, the house in Sway was the only one the couple shared during their marriage that was neither on a river or by the sea. At Sway Lyte lost a month-old daughter and wrote his first book, later published as Tales In Verse Illustrative of the Several Petitions of the Lord's Prayer (1826). In 1822 the Lytes moved to Dittisham, Devon, on the River Dart and then, after Lyte had regained some measure of health, to the small parish of Charleton.

Brixham
About April 1824, Lyte left Charleton for Lower Brixham, a Devon fishing village. Almost immediately, Lyte joined the schools committee, and two months later he became its chairman. Also in 1824, Lyte established the first Sunday school in the Torbay area and created a Sailors' Sunday School. Although religious instruction was given there, the primary object of both was educating children and seamen for whom other schooling was virtually impossible. Each year Lyte organised an Annual Treat for the 800–1000 Sunday school children, which included a short religious service followed by tea and sports in the field.

Shortly after Lyte's arrival in Brixham, the minister attracted such large crowds that the church had to be enlarged—the resulting structure later described by his grandson as "a hideous barn-like building."[14] Lyte added to his clerical income by taking resident pupils into his home, including the blind brother of Lord Robert Gascoyne-Cecil, later British prime minister. About 1830, Lyte made excavations at nearby Ash Hole Cavern, where he discovered pottery and human remains.

Character and personality
An older Henry Francis Lyte.
Lyte was a tall and "unusually handsome" man, "slightly eccentric but of great personal charm, a man noted for his wit and human understanding, a born poet and an able scholar." He was an expert flute player and according to his great-grandson always had his flute with him. Lyte spoke Latin, Greek, and French; enjoyed discussing literature; and was knowledgeable about wild flowers. At Berry Head House, a former military hospital at Berry Head, Lyte built a magnificent library—largely of theology and old English poetry—described in his obituary as "one of the most extensive and valuable in the West of England."

Nevertheless, Lyte was also able to identify with his parish of fishermen, visiting them at their homes and on board their ships in harbour, supplying every vessel with a Bible, and compiling songs and a manual of devotions for use at sea. In theology Lyte was a conservative evangelical who believed that man's nature was totally corrupt. Lyte frequently rose at 6 AM and prayed for two or more hours before breakfast.

In politics, Lyte was a Conservative who feared revolt among the irreligious poor. He publicly opposed Catholic Emancipation by speaking against it in several Devon towns, stating that he preferred Catholics to be "emancipated from priests and from the power of the factious and turbulent demagogues of Ireland." Lyte, a friend of Samuel Wilberforce, also opposed slavery, organising an 1833 petition to Parliament requesting it be abolished in Great Britain.

Decline and death
In poor health throughout his life, Lyte suffered various respiratory illnesses and often visited continental Europe in attempts to check their progress. In 1835 Lyte sought appointment as the vicar of Crediton but was rejected because of his increasingly debilitating asthma and bronchitis. In 1839, when only 46, Lyte wrote a poem entitled "Declining Days." Lyte also grew discouraged when numbers of his congregation (including in 1846, nearly his entire choir) left him for Dissenter congregations, especially the Plymouth Brethren, after Lyte expressed High Church sympathies and leaned towards the Oxford Movement.

By the 1840s, Lyte was spending much of his time in the warmer climates of France and Italy, making written suggestions about the conduct of his family's financial affairs after his death. When his daughter was married to his senior curate, Lyte did not perform the ceremony. Lyte complained of weakness and incessant coughing spasms, and he mentions medical treatments of blistering, bleeding, calomel, tartar emetic, and "large doses" of Prussic acid. Yet his friends found him buoyant, cheerful, and keenly interested in affairs of the Europe around him. Lyte spent the summer of 1847 at Berry Head then, after one final sermon to his congregation on the subject of the Holy Communion, he left again for Italy. He died on 20 November 1847 at Nice, at that time in the Kingdom of Sardinia, where he was buried. His last words were "Peace! Joy!"

Henry Francis Lyte was born June 1st, 1703 in Scotland. A graduate of Trinity College in Dublin, Lyte was a multitalented man. He was scholar, poet, musician, pastor, though illness followed him throughout his life.

Described as a “most gifted poet,” Henry F. Lyte has stirred centuries of souls with his precious lines forged of great suffering. The loss of his father as an infant and his mother a few years later left Henry orphaned at age nine. While comforting a dying clergyman, both men discovered in the scriptures their lack of hope. Together they sought and found forgiveness. Lyte would continue his life now in great peace and fervent service to his Master. After years of failing health, Pastor Lyte was beset by ailing frame, succumbing to tuberculosis. He preached his farewell message to his congregation in September of 1847 “as from a dying man.” His eyes drifted oft toward the eternal rest, penning in his final days the beloved hymn “Abide with me; fast falls the eventide.”

In 1874, Monk became a singing teacher at King’s College. In 1876, he became a teacher at the National Training School for Music. In 1878, he started teaching at Bedford College. In addition, he was music director for almost four decades at St. Matthias, Stoke Newington, London, and was the first musical editor for Hymns Ancient and Modern, the historic hymnal which sold 60 million copies.

Stripped of some of your vesture
By Monk or another. Now you wore no frill,
And at first you startled me. But I know you still,
Though I missed the minim’s waver
And the dotted quaver.

Bud never married, instead he lives with his father just south of Defiance Ohio.
Notes
Eventide 10. 10. 10. 10
Text from St. Luke 24:29
Lyrics
Abide with me; fast falls the eventide;
The darkness deepens; Lord, with me abide:
When other helpers fail and comforts flee,
Help of the helpless, O abide with me.

I need Thy presence every passing hour;
What but Thy grace can foil the tempter's power?
Who, like Thyself, my guide and stay can be?
Through cloud and sunshine, Lord, abide with me.

I fear no foe, with thee at hand to bless;
Ills have no weight, and tears no bitterness.
Where is death's dark sting? where, grave, thy victory?
I triumph still, if Thou abide with me.

Hold Thou Thy cross before my closing eyes;
Shine through the gloom, and point me to the skies;
Heaven's morning breaks, and earth's vain shadows flee;
In life, in death, O Lord, abide with me.