All Come And Thank The Lord

Here is a list of categories associated with this hymn!
Anthems 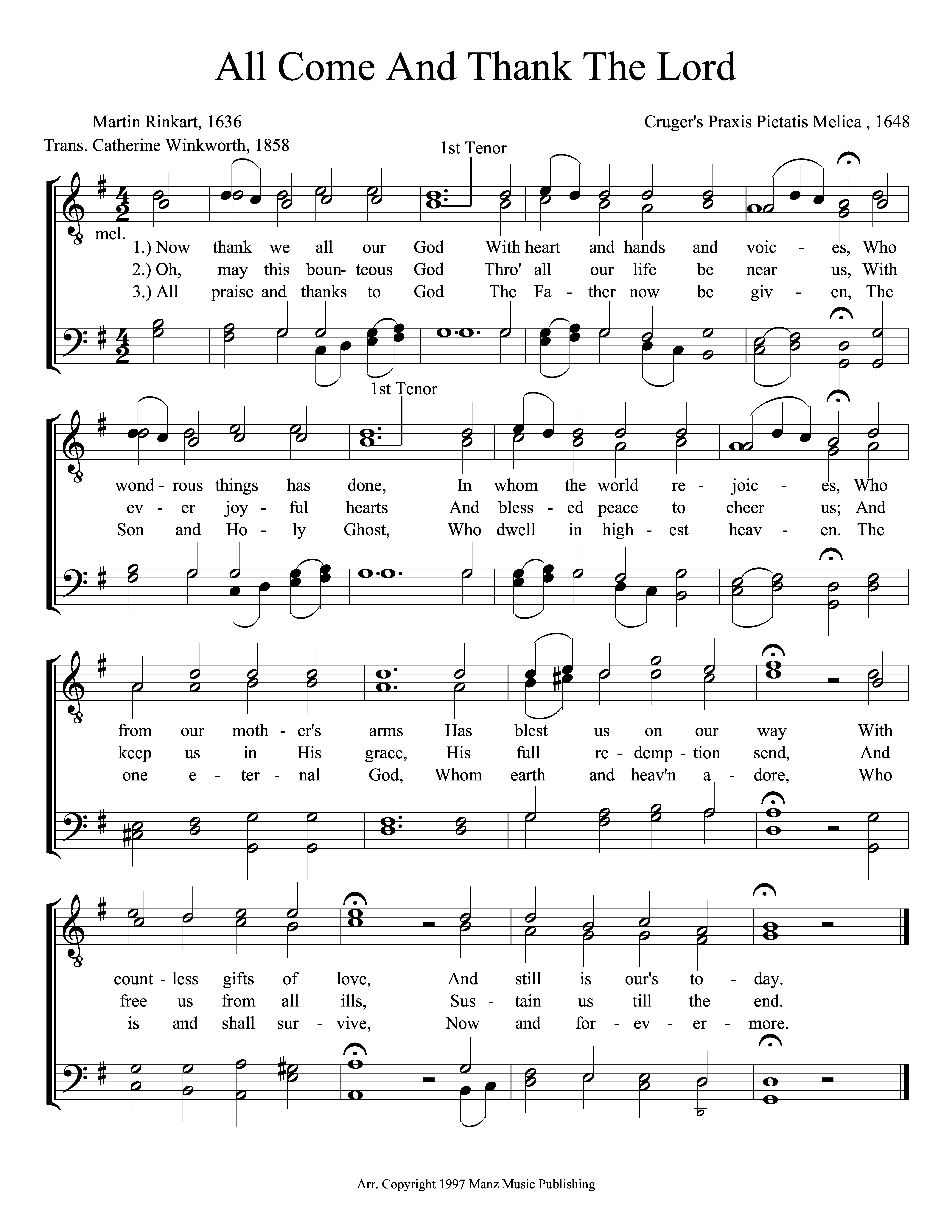 Martin Rinckart [Rinkart] was one of those provincial clergymen to whom Germany had so much reason to be grateful. The son of a poor coppersmith, he made his way at the University of Leipzig by dint of industry and his musical gifts, took orders, and was precentor of the church at Eisleben.

At the age of thirty-one was offered the place of Archdeacon at his native town of Eilenburg in Saxony. He went there as the war broke out, and died just after the peace, and throughout these thirty-one years he stood by his flock, and helped them to the utmost under every kind of distress. Of course he had to endure the quartering of soldiers in his house, and frequent plunderings of his little stock of grain and household goods. But these were small things.

The plague of 1637 visited Eilenburg with extraordinary severity; the town was overcrowded with fugitives from the country districts where the Swedes had been spreading devastation, and in this one year 8,000 persons died in it. The whole of the town council except three persons, a terrible number of school children, and the clergymen of the neighbouring parish, were all carried off; and Rinckart had to do the work of three men, and did it manfully at the beds of the sick and dying. He buried more than 4,000 persons, but through all his labours he himself remained perfectly well. The pestilence was followed by a famine so extreme that thirty or forty persons might be seen fighting in the streets for a dead cat or crow. Rinckart, with the burgomaster and one other citizen, did what could be done to organize assistance, and gave away everything but the barest rations for his own family, so that his door was surrounded by a crowd of poor starving wretches, who found it their only refuge.

After all this suffering came the Swedes once more, and imposed upon the unhappy town a tribute of 30,000 dollars. Rinckart ventured to the camp to entreat the general for mercy, and when it was refused, turned to the citizens who followed him, saying, "Come, my children, we can find no hearing, no mercy with men, let us take refuge with God." He fell on his knees, and prayed with such touching earnestness that the Swedish general relented, and lowered his demand at last to 2,000 florins. So great were Rinckart's own losses and charities that he had the utmost difficulty in finding bread and clothes for his children, and was forced to mortgage his future income for several years.

Yet how little his spirit was broken by all these calamities is shown by his best known hymn "Nun danket alle Gott" and others that he wrote; some indeed speaking of his country's sorrows, but all breathing the same spirit of unbounded trust and readiness to give thanks. He composed this simple but noble expression of trust and praise, when the hope of a general peace was dawning on the country. This hymn was published in Jesu-Hertz-Büchlein in geistlichen Oden in 1636, and set to music by Johann Crüger about 1647. It is among those selected by C. Winkworth for translation into English, and became known in the English hymnal world as as "Now thank we all our God".

The German composer, Johann [Johannes] Crüger, began studying theology in Wittenberg in 1620. He also studied at schools in Guben, Sorau, and Breslau, the Jesuit College at Olmütz, and the Poets’ School at Regensburg. He traveled through Austria, Hungary, Bohemia, and Moravia and then settled at Berlin in 1615. Here he employed himself as a private tutor until 1622, except for a short residence at the University of Wittenberg in 1620. He received a thorough musical training under Paulus Homberger in Regensburg, a pupil of Giovanni Gabrieli.

In 1622 Crüger was appointed cantor and organist of the Nikolaikirche (St. Nikolai Church) in Berlin, a post which he retained till his death. He was also one of the masters of the Greyfriars Gymnasium.

Crüger wrote no hymns, but he was one of the most distinguished music and tune composers of his time. He was a friend of Paul Gerhardt, and wrote melodies for many hymns by Paul Gerhardt and others. He composed 71 chorales, of which 18 have received a wide usage in the Evangelical churches of the world. Crüger composed sacred works for choral and instrumental performances, and was also a musicologist and wrote about the theory and practice of music. His church-hymn collections include Neues vollkömmliches Gesangbuch, 1640; Praxis pietatis melica, 1644, which appeared in many editions; Geistliche Kirchenmelodeyen, 1649; Psalmodica sacra, 1658. His other works include: Synopsis musica, 1630; Musicae practicae praecepta (Rules for Practicing Music), 1660.

From Cruger's Praxis Pietatis Melica, 1648
Lyrics
Now thank we all our God
With heart, and hands and voices,
Who wondrous things has done,
In whom the world rejoices,
Who from our mother's arms
Has blest us on our way
With countless gifts of love,
And still is ours today.

Oh, may this bounteous God
Thro' all our lives be near us,
With ever joyful hearts
And blessed peace to cheer us;
And keep us in His grace,
His full redemption send,
And free us from all ills,
Sustain us to the end.

All praise and thanks to God
The Father now be given,
The Son and Holy Ghost,
Who dwell in highest heaven.
The one eternal God,
Whom earth and heav'n adore,
Who is and shall survive,
Now and forevermore.