The King Of Love My Shepherd Is

Here is a list of categories associated with this hymn!
Anthems 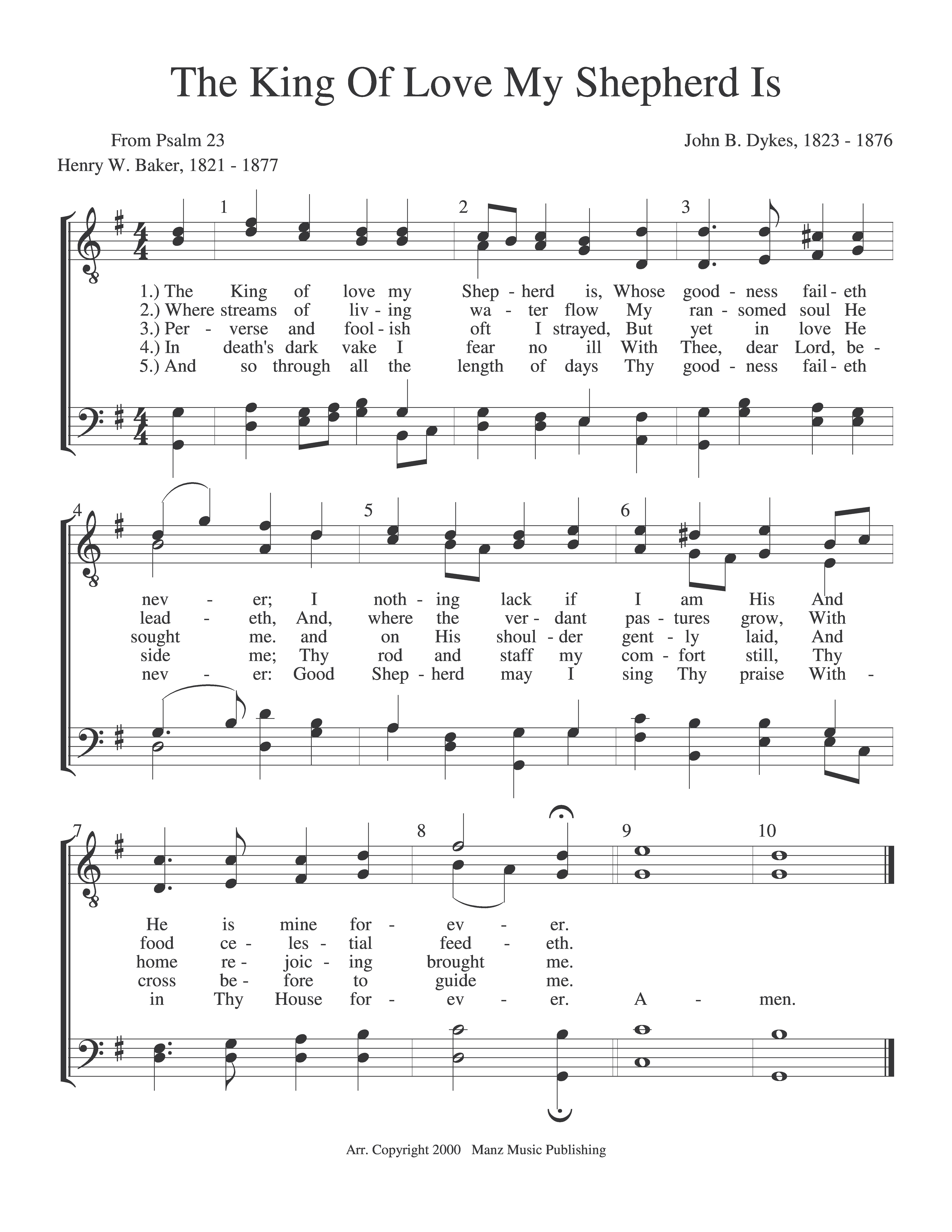 Back to the list
Author
Henry Williams Baker in 1868

His friend John Ellerton reported that Baker’s dying words were from his famous hymn:

Perverse and foolish oft I strayed,
But yet in love He sought me,
And on His shoulder gently laid,
And home, rejoicing, brought me.

Baker was the son of Vice Admiral Henry Loraine Baker. He attended Trinity College at Cambridge, was ordained in 1844, and became assistant curate at Great Hockesley, near Colchester, Essex. In 1851, he became Vicar of Monkland Priory Church in Herefordshire, England, where he served most of his life. Upon his father’s death in 1859, Baker assumed the family baronetcy. From 1860 to 1877, he was editor-in-chief of the Anglican Hymns Ancient and Modern, and contributed hymns, tunes, and translations. This historic hymnal sold 60 million copies.

Almighty God, Whose Only Son
From Highest Heav’n the Eternal Son
God Made Me for Himself
How Welcome Was the Call
Jesu, for the Beacon-Light
King of Love My Shepherd Is, The
Lord Jesus, God and Man
Lord, Thy Word Abideth
My Father, for Another Night
O God of Love, O King of Peace
O Holy Ghost, Thy People Bless
O Perfect Life of Love
O Praise Our God Today
O Praise Ye the Lord
Oh! What, If We Are Christ’s
Out of the Deep I Call
Praise, O Praise Our God and King
Redeemed, Restored, Forgiven
Rejoice Today with One Accord
Sing Praise to the Lord!
Sweet Flow’rets of the Martyr Band
There Is a Blessèd Home
’Tis Done! That New and Heavenly Birth

Captains of the Saintly Band
Good It Is to Keep the Fast
Jesu, Grant Me This, I Pray
Now My Soul, Thy Voice Upraising
O Christ, Redeemer of Our Race
Of the Father’s Love Begotten
On This Day, the First of Days
Sion’s Daughter, Weep No More
What Our Father Does Is Well

Sorry, we have no information for this composer
Arranger
Alvin (Bud) Herman Manz in 2000

Bud never married, instead he lives with his father just south of Defiance Ohio.
Notes
Text from Psalm 23
DOMINUS REGIT ME. 8. 7. 8. 7.
Lyrics
The King of Love my Shepherd is,
Whose goodness faileth never;
I nothing lack if I am His
And He is mine forever.

Where streams of living water flow,
My ransomed soul He leadeth,
And, where the verdant pastures grow,
With food celestial feedeth.

Perverse and foolish oft I strayed,
But yet in love He sought me,
And on His shoulder gently laid
And home, rejoicing, brought me.

In death's dark vale I fear no ill,
With Thee, dear Lord, beside me;
Thy rod and staff my comfort still,
Thy cross before to guide me.

Thou spread'st a table in my sight;
Thy unction grace bestoweth;
And O what transport of delight
From Thy pure chalice floweth.

And so through all the length of days
Thy goodness faileth never.
Good Shepherd, may I sing Thy praise
Within Thy house forever!