What Must It Be To Be There 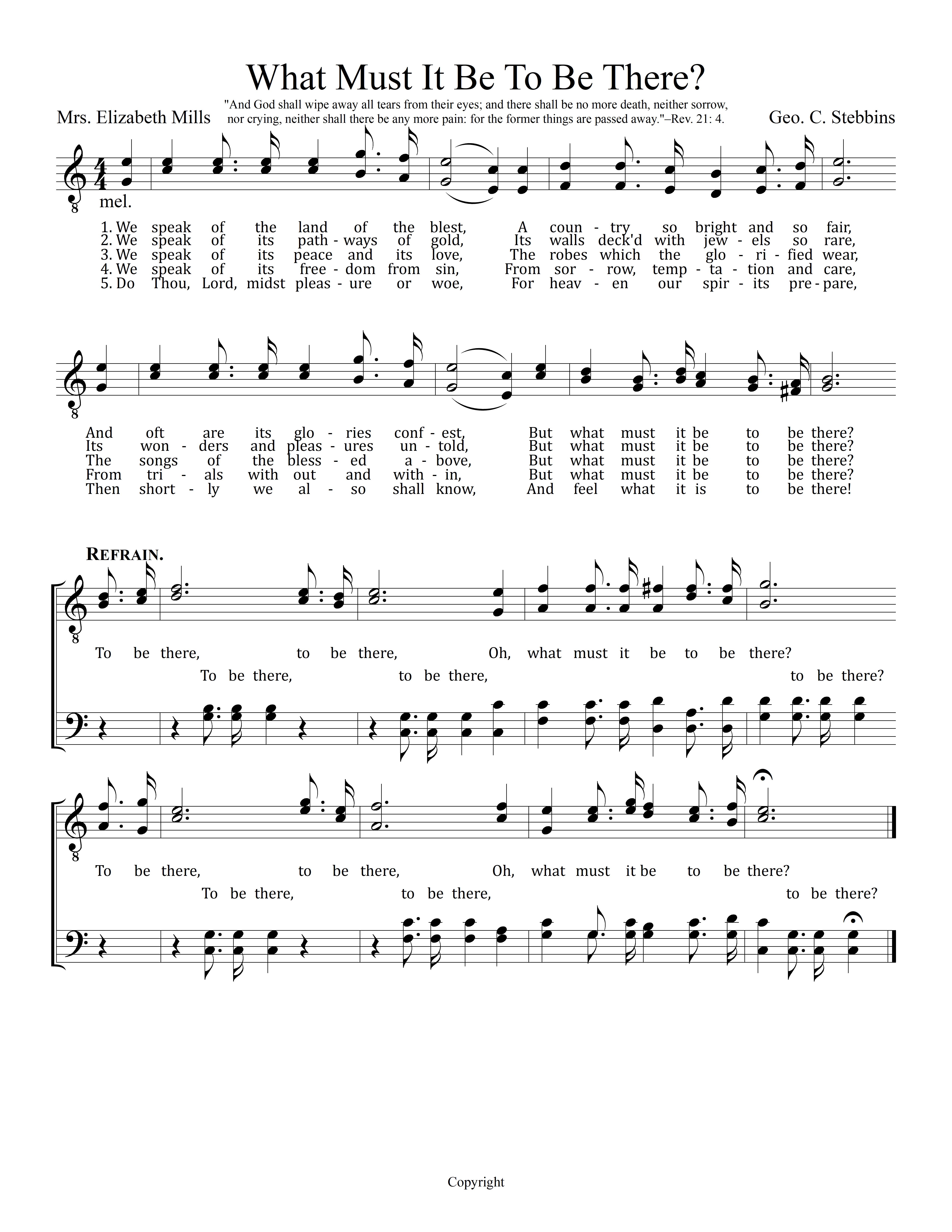 Sorry, we have no information for this author
Composer
George C. Stebbins

Stebbins studied music in Buffalo and Rochester, New York, then became a singing teacher. Around 1869, he moved to Chicago, Illinois, to join the Lyon and Healy Music Company. He also became the music director at the First Baptist Church in Chicago. It was in Chicago that he met the leaders in the Gospel music field, such as George Root, Philip Bliss, and Ira Sankey.

At age 28, Stebbins moved to Boston, Massachusetts, where he became music director at the Claredon Street Baptist Church; the pastor there was Adoniram Gordon. Two years later, Stebbins became music director at Tremont Temple in Boston. Shortly thereafter, he became involved in evangelism campaigns with Moody and others. Around 1900, Stebbins spent a year as an evangelist in India, Egypt, Italy, Palestine, France and England. His works include:

Adelaide
Assiut
Christ Is Risen!
Come, Come Away!
Come to the Fountain
Coming of His Feet, The
Friend
Fully Trusting
Gather Them In
God Holds the Key
Green Hill
He Is Near
Holiness
Impatient Heart, Be Still
In the Secret of His Presence
Janet
Jesus, I Come
Jesus Is Tenderly Calling You Home
Junkin
Just a Little Help from You
Life in the Loom
Look Up! Ye Weary Ones
Lydia
Must I Go, and Empty-Handed?
Prodigal Son, The
Saved by Grace
Savior, Breathe an Evening Blessing
Singing All the Time
Some Sweet Morn
Thanks to God (Stebbins)
Throw Out the Life-Line
Truehearted, Wholehearted, Faithful and Loyal
What Will You Do with Jesus?
Wonderful Love
Ye Must Be Born Again

Bud never married, instead he lives with his father just south of Defiance Ohio.
Lyrics
We speak of the land of the blest,
A country so bright and so fair,
And oft are its glories confest,
But what must it be to be there?

We speak of its pathways of gold,
Its walls deck'd with jewels so rare,
Its wonders and pleasures untold,
But what must it be to be there?

We speak of its peace and its love,
The robes which the glorified wear,
The songs of the blessed above,
But what must it be to be there?

We speak of its freedom from sin,
From sorrow, temptation and care,
From trials with out and within,
But what must it be to be there?

Do Thou, Lord, midst pleasure or woe,
For heaven our spirits prepare,
Then shortly we also shall know,
And feel what it is to be there!