Will The Circle Be Unbroken 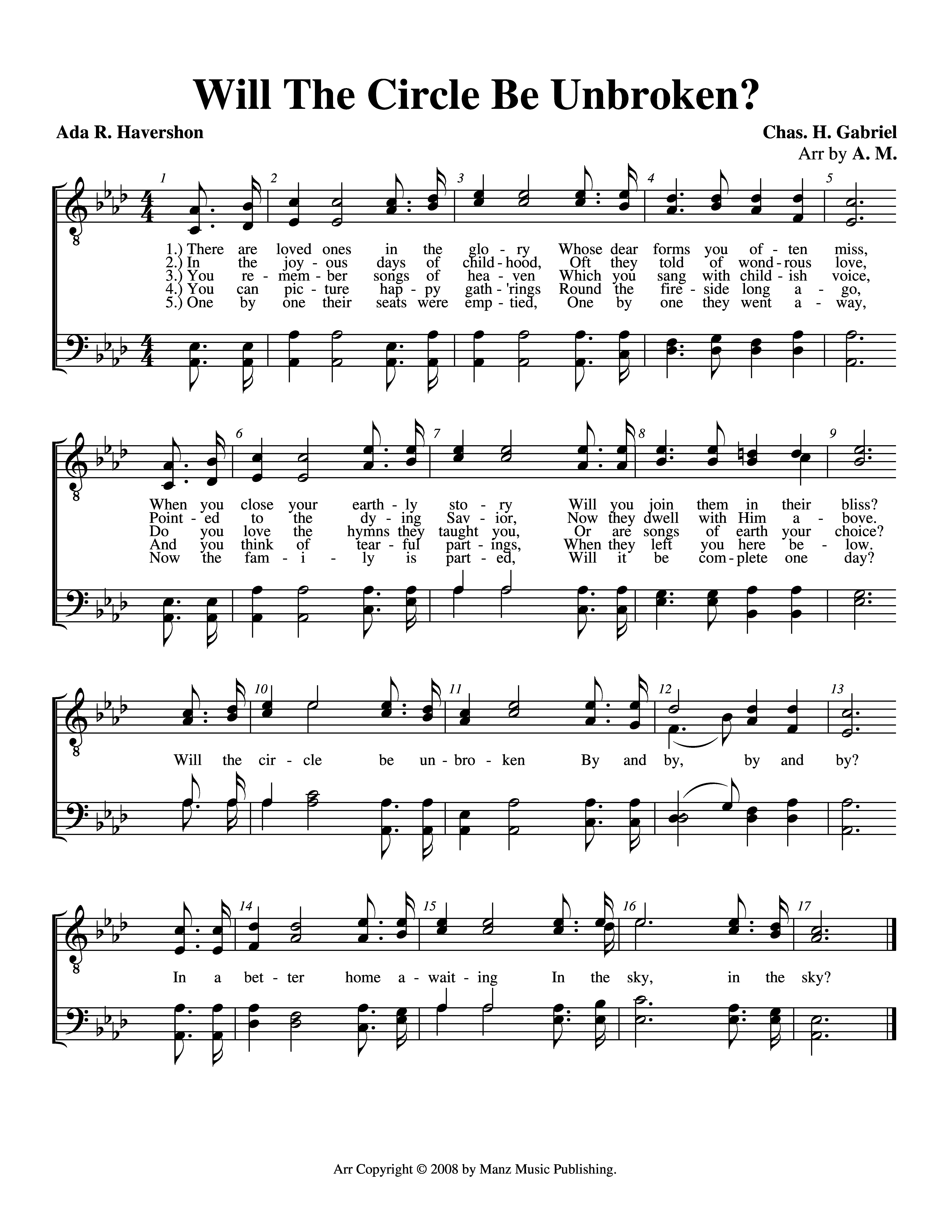 8 January 1861–1 February 1918
I had the pleasure of being entertained for some weeks in the home of Miss Ada Habershon, the author of many beautiful hymns—among which are “Will the Circle Be Unbroken,” set to music by Charles H. Gabriel, and “Oh, What a Change!” the music by Robert Harkness.

Miss Habershon sang with me frequently during those weeks. Up to that time she neither had at­tempted to write hymns nor to give attention to the special Bible work that in later years brought her into prominence. During the Torrey and Alexander Mission in London Mr. Alexander discovered her ability as a writer of gospel hymns and arranged with her to write for him exclusively, which arrangement continued until her death, a few years prior to his own passing.

Ada Ruth Habershon (1861-1918) was an English Christian hymnist, best known for her 1907 gospel song "Will the Circle Be Unbroken?" for which the tune was composed by Charles H. Gabriel.

Biography
Ada R. Habershon was born in Marylebone, England, on 8 January 1861. Her father, Dr. Samuel Osborne Habershon, was a noted physician; her mother was Grace Habershon. She was raised in Chelsea, London, in a Christian home. In her twenties, she was a member of the circle surrounding Charles Spurgeon. She met Dwight L. Moody and Ira D. Sankey in 1884 during their preaching tour of England. At their urging, she visited the United States, delivering a series of lectures on the Old Testament that were later published.

Habershon's first foray into hymn writing came in 1899, when she wrote several hymns in the German language. She wrote her first English language hymns in 1901, while ill. In 1905, Charles M. Alexander and R. A. Torrey toured the United Kingdom, and Alexander asked Habershon to write hymns for use during this evangelistic tour. Habershon ultimately sent Alexander over 200 hymns.

Mr. Charles H. Gabriel was a great composer and musician. Gabriel loved music from a young age. He was born in Iowa on August 18, 1856 and grew up on his family farm. The lessons he learned early in life would shape him into the person he became. In fact, he was only 17 years old when he began teaching singing classes throughout the Southern, Western, and Northern states. It wasn’t long before he moved to California and became one of the greatest composers on the West Coast.

Gabriel received little to no instruction in music and developed his style of music completely on his own. He is well known for the music he composed including music for Sunday schools and evangelistic meetings. The song, “Send the Light,” is known for being one of the best missionary songs available. He published many Christmas cantatas, cantatas for adults, operettas and the cantata, “Saul, King of Israel,” the work he considered his best. His other works include many marches and waltzes for military bands, books of music for female and male voices, and books for children’s music, some of which are his most remembered works.

This great composer was known among many, but was not one to have any kind of rivalry with other musicians and composers. Hall described him as, “a very genial and kindly-spirited man. His large success has not spoiled him but seems rather to have added kindliness and helpfulness to his naturally generous disposition.” It is no wonder he had such an impact on the music community.

Comfort me, whene’er I mourn,
With the hope of thy return,
And till I thy glory see,
Bid me still believe in thee.

Bud never married, instead he lives with his father just south of Defiance Ohio.
Lyrics
There are loved ones in the glory,
Whose dear forms you often miss,
When you close your earthly story
Will you join them in their bliss?

In the joyous days of childhood,
Oft they told of wondrous love,
Pointed to the dying Savior,
Now they dwell with Him above.

You remember songs of heaven
Which you sang with childish voice,
Do you love the hymns they taught you,
Or are songs of earth your choice?

You can picture happy gatherings
Round the fireside long ago,
And you think of tearful partings,
When they left you here below.

One by one their seats were emptied,
One by one they went away,
Now the family is parted,
Will it be complete one day?

Chorus:
Will the circle be unbroken
By and by, by and by?
In a better home awaiting
In the sky, in the sky?