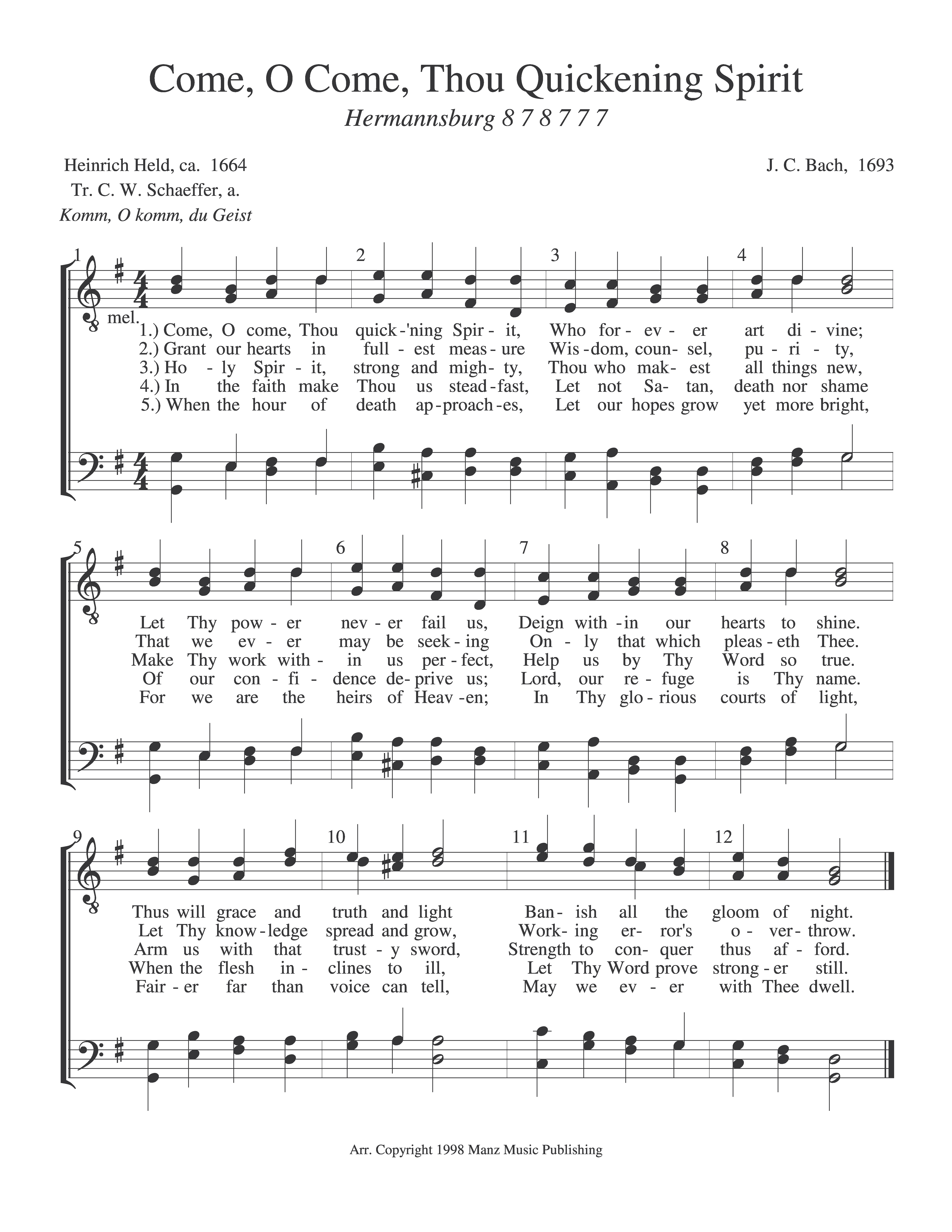 Sorry, we have no information for this author
Composer
Johann Christoph Bach in 1693

The German composer and organist, Johann Christoph Bach [13], received a thorough musical grounding from his father, Heinrich Bach [6], and on November 20, 1663 was appointed organist of the Arnstadt castle chapel. Two years later he was invited by the Eisenach town council to apply for the post of town organist at St George's (where the Kantor was Andreas Christian Dedekind); after an audition on December 10, 1665 he was appointed to that position and also to the post of organist and harpsichordist in the court Kapelle of the Duke of Eisenach. He retained both positions until his death.

Little is known of his work in the court Kapelle. For some years the Kapellmeister was Daniel Eberlin, the father-in-law of Georg Philipp Telemann, who was later to conduct the Kapelle on occasion, and for a short while Johann Pachelbel was a member of the Kapelle. During most of his time there, Johann Christoph was a colleague of his cousin, the trumpeter Johann Ambrosius Bach [11]; Ambrosius often served as his copyist, and their relationship was doubtless a close one. The young J.S. Bach must have received his first impressions of the organ from his uncle. While Johann Christoph's court position was one of high standing, his tenure of the civic one was marred by a succession of quarrels between him and the town council, for which he was not entirely blameless. These mostly involved matters of salary and the council's refusal to provide an official residence for him, a deficiency eventually made good by the court. For many years he also battled with the council over the restoration (or reconstruction) of the organ at St George's; he was successful only in 1696, and then did not live to see the completion (by J.C. Stertzing) of the famous instrument in 1707 (his copious, expert notes on the organ's reconstruction are extant; see Freyse). He died in 1703, just ten days after the death of his wife; her illnesses and those of their children, as well as other family difficulties, had plagued him. throughout his Eisenach years.

Within the Bach family Johann Christoph was highly respected as a composer (a 'profound' one according to the Ursprung). In J.S. Bach's obituary notice of 1754 he is mentioned expressly as one who 'was as good at inventing beautiful thoughts as he was at expressing words. He composed, to the extent that current taste permitted, in a galant and cantabile style, uncommonly full-textured. .. On the organ and the keyboard [he] never played with fewer than five independent parts'. J.S. Bach performed some of his motets and vocal concertos (including the 22-part Es erhub sich ein Streit) in Leipzig (as did Carl Philipp Emanuel Bach later in Hamburg), and he added a final chorale (BWV Anh 159) to the motet Ich lasse dich nicht. Although Johann Christoph was primarily an organist and harpsichordist, his extant keyboard works are few, but they show him as a capable composer, stylistically akin to Johann Pachelbel though in general less pedantic. The Eb prelude and fugue is a significant work, and his organ chorales (probably in effect written-down improvisations) demonstrate his mastery of the small form. His vocal works, in particular the motets and concertos, are notable for the variety of their settings. The concertos are characterized by their full instrumental writing, with unusually interesting inner part-writing. While the vocal writing is for the most part technically undemanding (bearing in mind the needs of elementary choirs), the instrumental parts are usually highly elaborate. There is much solo-tutti alternation. Basically the motets follow the central German type of the aria motet and the chorale motet, which indeed culminated in the works of Johann Christoph and his brother Johann Michael Bach [14]. The older style of writing, with alternating chordal and imitative sections, still predominated; but the newer style, with its livelier lines (including melismatic semiquaver passages) and looser, more concertante writing, is found in Sei getreu bis in den Tod and Der Mensch, vom Weibe geboren, obviously later works. The lack of documentation and the small number of the surviving works preclude the establishment of a clear chronology of Johann Christoph's music.

Bud never married, instead he lives with his father just south of Defiance Ohio.
Notes
Translated by Charles W. Schaeffer, 1866, alt.
Text from Romans 8:15
Hermannburg. 8. 7. 8. 7. 7. 7.
Lyrics
Come, O come, Thou quick'ning Spirit,
Who forever art divine;
Let Thy power never fail us,
Deign within our hearts to shine.
Thus will grace and truth and light
Banish all the gloom of night.

Grant our hearts in fullest measure
Wisdom, counsel, purity,
That we ever may be seeking
Only that which pleaseth Thee.
Let Thy knowledge spread and grow,
Working error's overthrow.

Holy Spirit, strong and mighty,
Thou who makest all things new,
Make Thy work within us perfect,
Help us by Thy Word so true.
Arm us with that trusty sword,
Strength to conquer thus afford.

In the faith make Thou us steadfast,
Let not Satan, death nor shame
Of our confidence deprive us;
Lord, our refuge is Thy name.
When the flesh inclines to ill,
Let Thy Word prove stronger still.

When the hour of death approaches,
Let our hopes grow yet more bright,
For we are the heirs of Heaven;
In Thy glorious courts of light.
Fairer far than voice can tell,
May we ever with Thee dwell.