Forever With The Lord 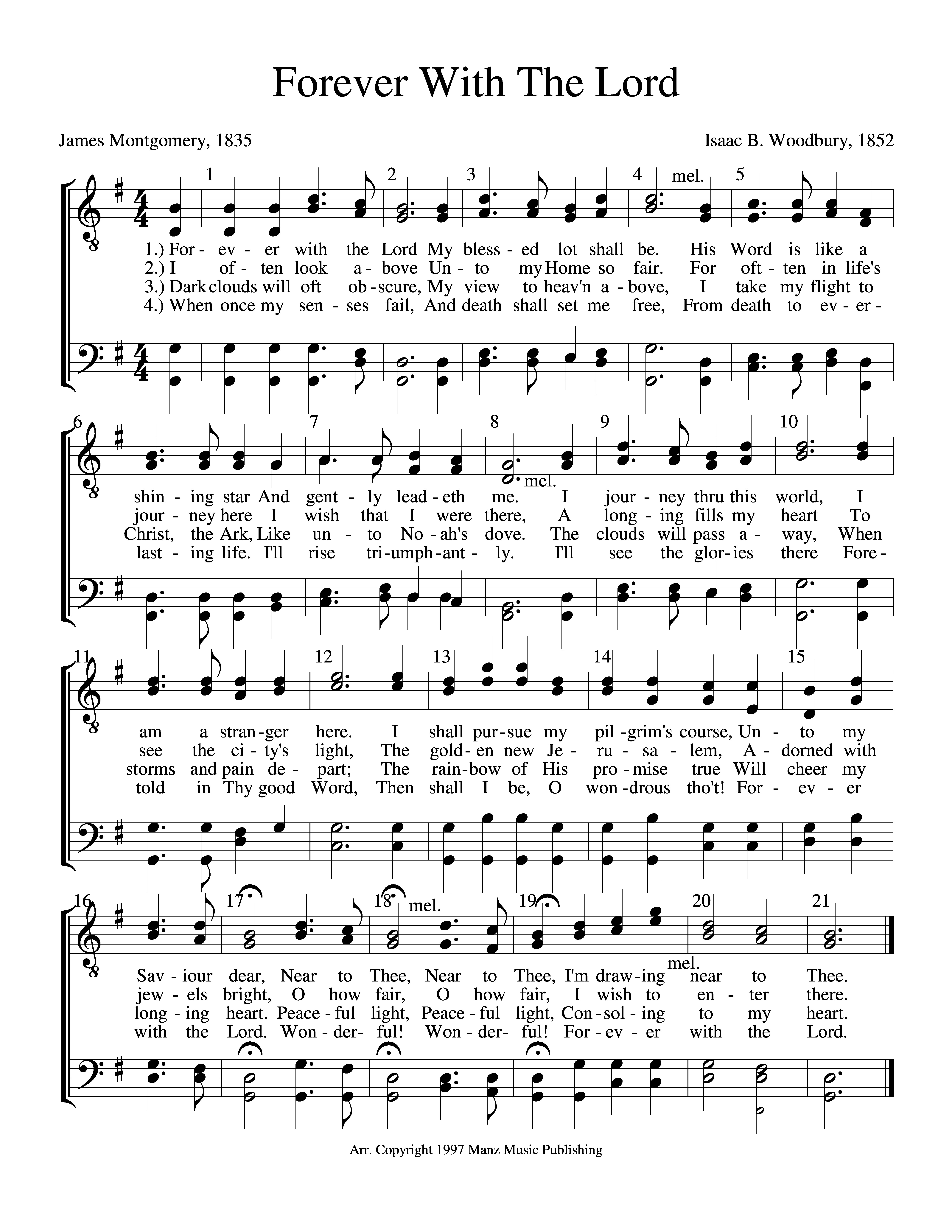 Midwest Brothers
Back to the list
Author
James Montgomery in 1835

Buried: Sheffield, England. In his memory, a statue was erected in the Sheffield cemetery, a stained glass window was installed in the parish church, and a public hall was named after him.

When Montgomery was five years old, his family moved to the Moravian settlement at Gracehill, near Ballymena, County Antrim. Two years later, he was sent to the Fulneck Seminary in Yorkshire. He left Fulneck in 1787 to work in a shop in Mirfield, near Wakefield. Soon tiring of that, he secured a similar position at Wath, near Rotherham, only to find it as unsuitable as his previous job. A trip to London, hoping to find a publisher for his youthful poems, ended in failure. In 1792, he gladly left Wath for Sheffield to be assistant to Mr. Gales, auctioneer, bookseller, and printer of the Sheffield Register. In 1794, Gales left England to avoid political prosecution. Montgomery took the Sheffield Register in hand, changed its name to the Sheffield Iris, and continued to edit it for 32 years. During the next two years he was imprisoned twice, first for reprinting a song in commemoration of the fall of the Bastille, then for giving an account of a riot in Sheffield.

Woodbury studied with Lowell Mason in Boston, Massachusetts. He had further studies in Paris and London in the late 1830’s. After returning to Boston, he taught music, played the organ, and conducted choral groups. He edited World of Music and the American Monthly Musical Review. In 1849 he moved to New York. After contracting tuberculosis, he traveled in the Mediterranean and Florida. His works include oratorios, cantatas, chorus, flees, piano pieces, teaching pieces, and:

Bud never married, instead he lives with his father just south of Defiance Ohio.
Notes
Text from I Thessalonians 4:17
Lyrics
Forever with the Lord
My blessed lot shall be,
His Word is like a shining star
And gently leadeth me.
I journey through this world,
I am a stranger here.
I shall pursue my pilgrim's course,
Unto my Saviour dear,
Near to Thee, Near to Thee,
I'm drawing near to Thee.

I often look above
Unto my Home so fair,
For often in life's journey here
I wish that I were there,
A longing fills my heart
To see the city's light,
The golden new Jerusalem,
Adorned with jewels bright,
O how fair, O how fair,
I wish to enter there.

Dark clouds will oft obscure,
My view to heav'n above,
I take my flight to Christ, the Ark,
Like unto Noah's dove.
The clouds will pass away,
When storms and pain depart;
The rainbow of His promise true,
Will cheer my longing heart.
Peaceful light, Peaceful light,
Consoling to my heart.