Great God! And Wilt Thou Condescend 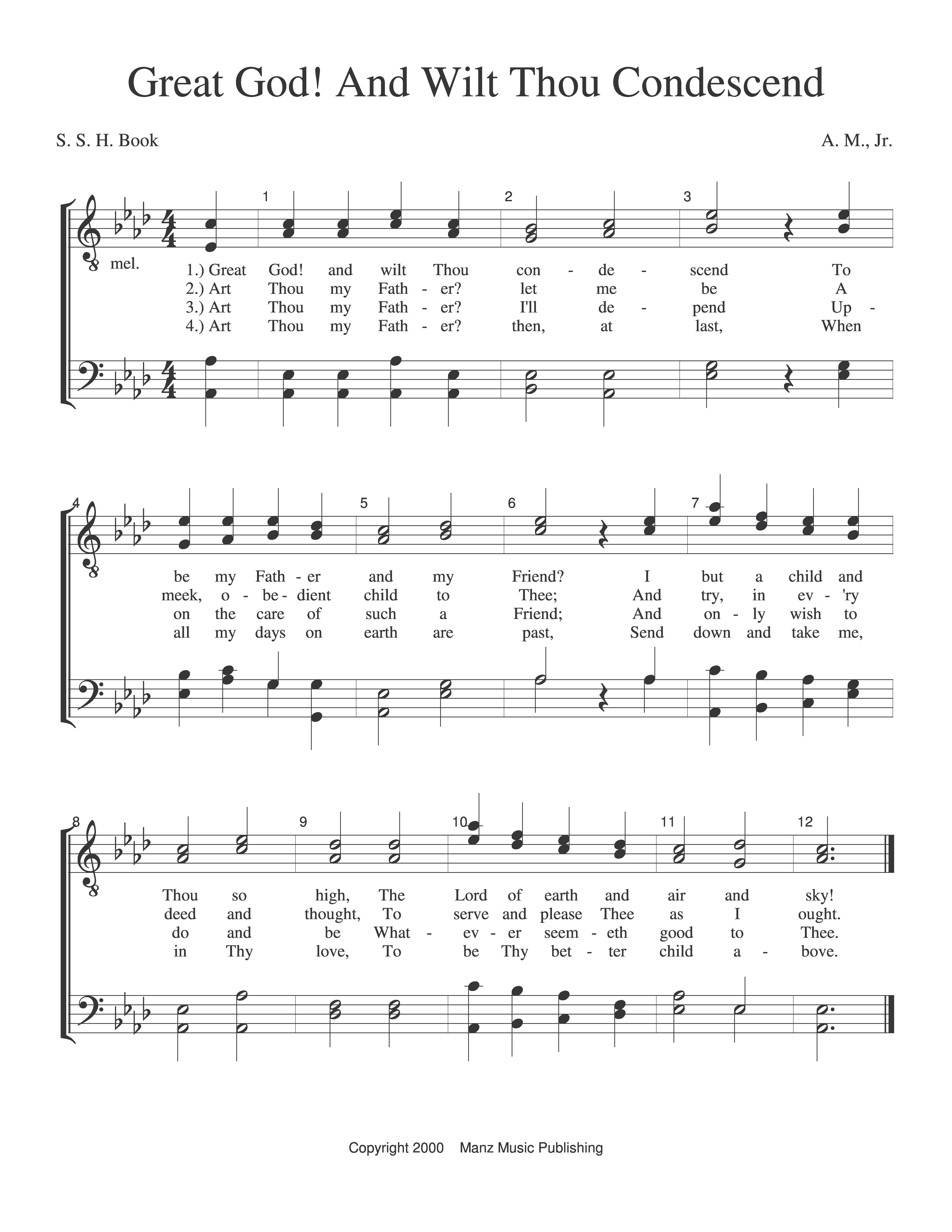 Short Name: Ann Taylor
Full Name: Taylor, Ann, 1782-1866
Birth Year: 1782
Death Year: 1866
Gilbert, Ann, nèe Taylor, the elder of the two sisters, and daughter of Isaac Taylor, was born at London, Jan. 30, 1782, her father at that time being engaged in London as an engraver. Subsequently her father became a Congregational Minister, and resided, first at Colchester and then at Ongar. In 1813 she was married to the Rev. Joseph Gilbert, Classical and Mathematical Tutor at the Congregational College, Masborough, near Rotherham, Yorkshire. From Masborough they passed to Hull, and then to Nottingham, where Mr. Gilbert died in 1852. Mrs. Gilbert remained at Nottingham, and died there Dec. 20, 1866. In addition to contributing hymns to the joint works of herself and her sister Jane, a few were given in Collyer's Collection, 1812, signed " A." or "A. T.," and about 100 of her hymns appeared in Dr. Leifchild's Original Hymns, 1842, and a few in the Nottingham Hymn Book (1812, 20th edition, 1861). She published independently, Hymns for Sunday School Anniversaries, 1827; Hymns for Infant School, 1827; and The Wedding among the Flowers. Her Memoirs by her son, Josiah Gilbert, were published in 1874.

Mr. Gilbert's edition of the Hymns for Infant Minds, 1886, together with manuscript notes, are our authorities for the foregoing ascriptions of authorship. Mr. Gilbert cannot distinguish the authorship of the following hymns by her or her sister, Jane Taylor:—
1. Good David, whose Psalms have so often been sung (1812). Concerning David.
2. If Jesus Christ was sent (1812). Repentance.
3. King Solomon of old (1812). Concerning Solomon.
Taken as a whole, her hymns are somewhat depressing in tone. They lack brightness and warmth.

Bud never married, instead he lives with his father just south of Defiance Ohio.
Arranger
Alvin (Bud) Herman Manz in 2000

Bud never married, instead he lives with his father just south of Defiance Ohio.
Notes
First appeared in A. & J. Taylor's Hymns for Infant Minds, 1810, No. 5, in 5 stanzas of 4 lines (edition 1886, p. 10). It is entitled, "Our Father, which art in heaven." For many years it was received as the production of Jane Taylor; but now, on the authority of Mrs. Gilbert's Memorials, it is rightly assigned to the latter. It is of this hymn that her biographer writes:—

"It may not be too much to say that the manner of the Divine Teacher has been seldom more nearly approached. Such might have been the little child whom 'He set in the midst.' In such words might the most mature Christian address his Father in heaven." Memorials, 1874, vol. i. p. 224.

This is the most popular of Mrs. Gilbert's hymns, and is in extensive use in all English-speaking countries.

Source: https://hymnary.org/text/great_god_and_wilt_thou_condescend
Lyrics
Great God! and wilt Thou condescend
To be my Father and my Friend?
I but a child and Thou so high,
The Lord of earth and air and sky!

Art Thou my Father? let me be
A meek, obedient child to Thee;
And try, in ev'ry deed and thought,
To serve and please Thee as I ought.

Art Thou my Father? I'll depend
Upon the care of such a Friend;
And only wish to do and be
Whatever seemeth good to Thee.

Art Thou my Father? then, at last,
When all my days on earth are past,
Send down and take me, in Thy love,
To be Thy better child above.