It Came Upon The Midnight Clear 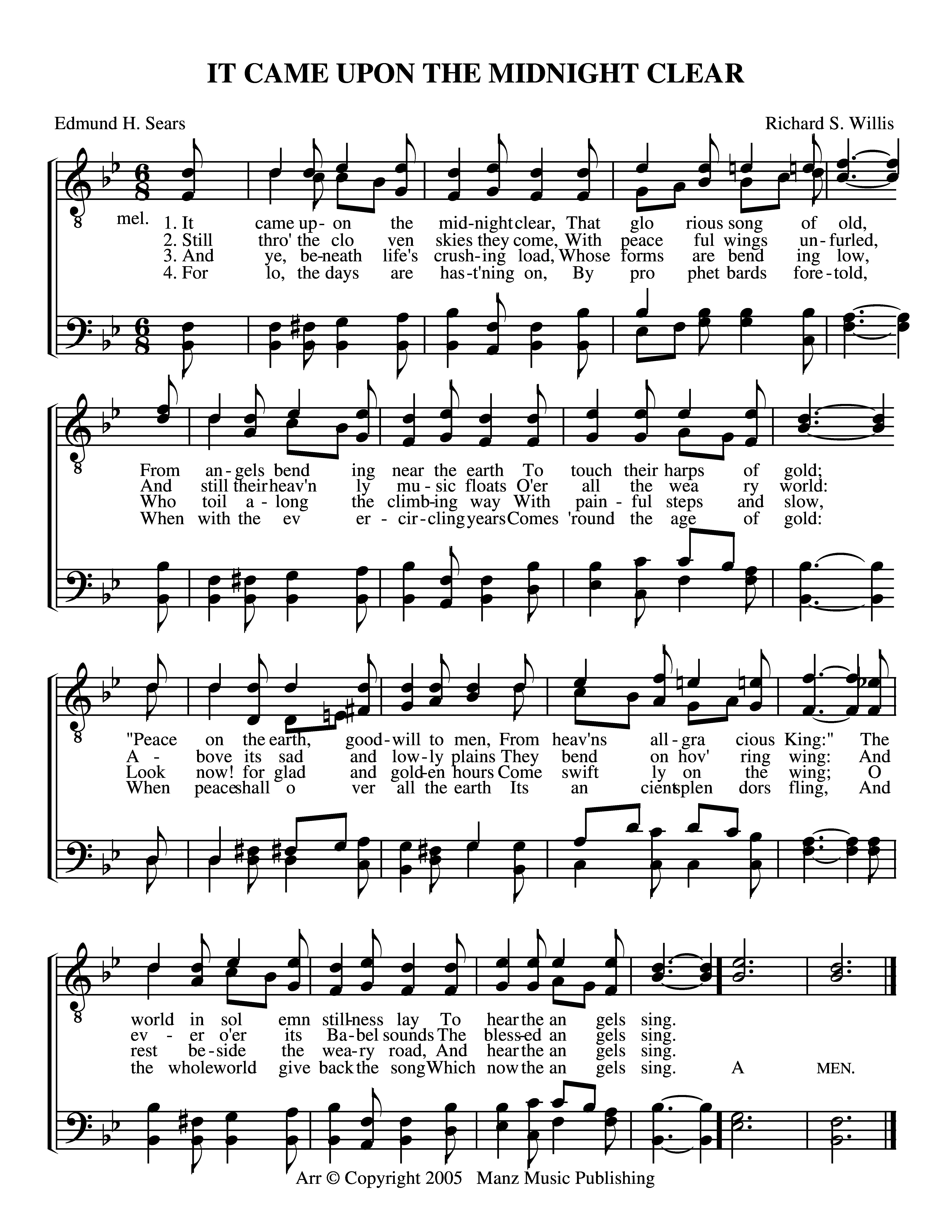 Back to the list
Author
Edmund H. Sears in 1849

Sorry, we have no information for this author
Composer
Richard Storrs Willis in 1850

Willis attended Chauncey Hall, the Boston Latin School, and Yale University, graduating in 1841. He then went to Germany, where he studied six years under Xavier Schnyder and Moritz Hauptmann. While there, he became a personal friend of Felix Mendelssohn. After returning to America, Willis served as music critic for the New York Tribune, The Albion, and The Musical Times, and edited The Musical Times (1852-64). He moved to Detroit in 1861, where he lived the rest of his life, except 1874-78, when he was in Italy while his daughter attended school. His works include:

First published in 1849, these lines mark the first of any carols by an American writer and one of only two lyrics penned by Edmund Sears. “Although I was educated in the Unitarian denomination, I believe and preach the divinity of Christ,” he wrote. The depths of turmoil at its writing are in stark contrast to the peace which the lines profess: the Civil War loomed near; the upheaval of the Industrial Revolution was ongoing and the obsessive rush for greed of gold in the west was disrupting communities. One can almost see the wistful wonder Edmund must have visualized of the hope yet to come.

Source: https://melodypublications.com/blogs/news/it-came-upon-the-midnight-clear-edmund-sears
Lyrics
It came upon the midnight clear,
That glorious song of old,
From angels bending near the earth
To touch their harps of gold;
"Peace on the earth, goodwill to men,
From heav'ns allgracious King:
"The world in solemn stillness lay
To hear the angels sing.

Still thro' the cloven skies they come,
With peaceful wings unfurled,
And still their heav'nly music floats
O'er all the weary world:
Above its sad and lowly plains
They bend on hov'ring wing:
And ever o'er its Babel sounds
The blessed angels sing.

And ye, beneath life's crushing load,
Whose forms are bending low,
Who toil along the climbing way
With painful steps and slow,
Look now! for gladand golden hours
Come swiftly on the wing;
O rest beside the weary road,
And hear the angels sing.

For lo, the days are hast'ning on,
By prophet bards foretold,
When with the evercircling years
Comes 'round the ageof gold:
When peace shall over all the earth
Its ancient splendors fling,
And the whole world give back the song
Which now the angels sing. AMEN.