O, God, Beneath Thy Guiding Hand 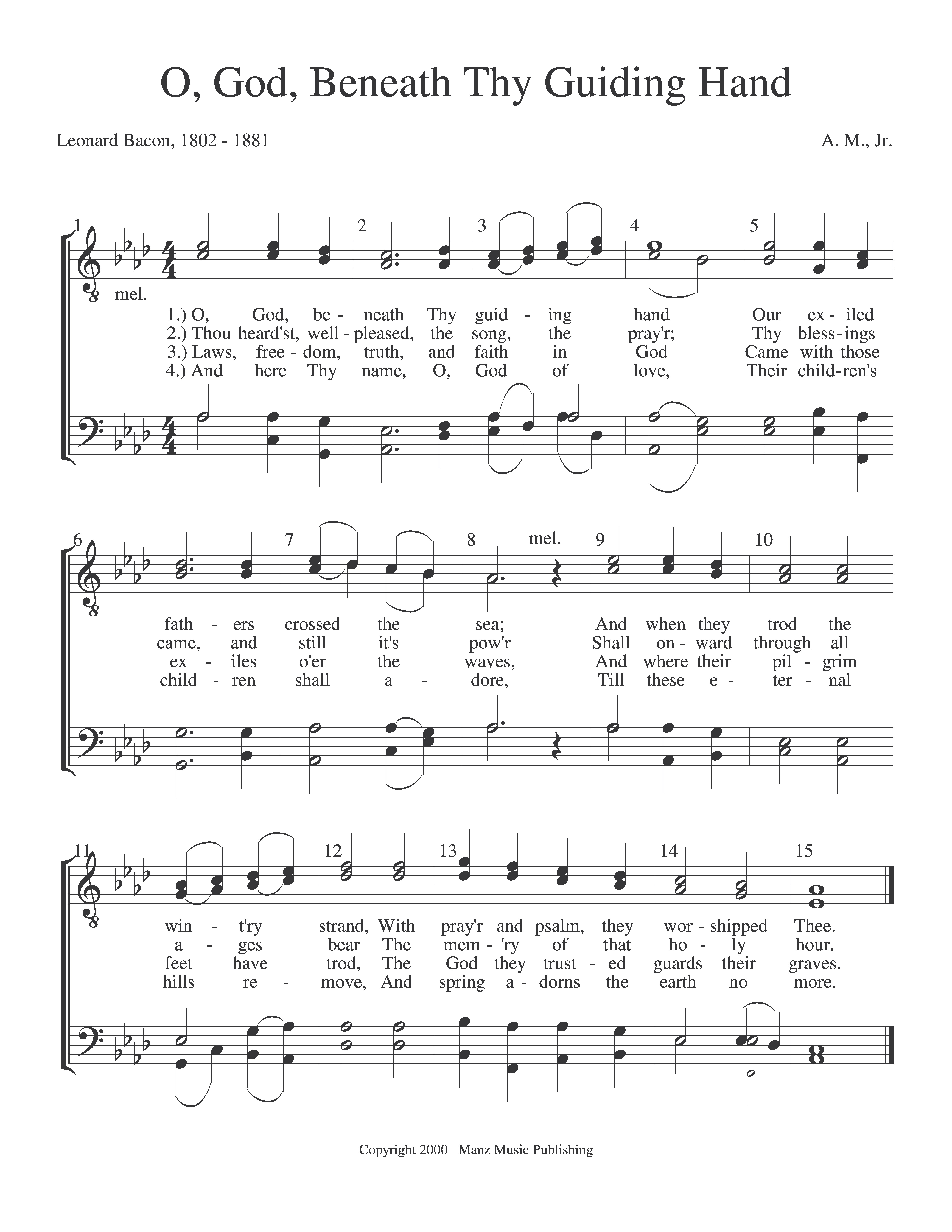 Leonard’s father was David Bacon, missionary to the Indians. In his childhood years in Tallmadge, Ohio, Leonard was a classmate to John Brown, who later became a noted abolitionist.

Bacon matriculated at Yale University in autumn 1817. After graduation, he entered Andover Theological Seminary. He was ordained as an evangelist by the Hartford North Consociation, assembled at Windsor, Connecticut, September 28, 1824. In 1825, he became pastor of the First Church in New Haven, Connecticut.

Hymns and Sacred Songs for the Monthly Concert, 1823
Select Practical Writings of Richard Baxter, 1831
A Manual for Young Church Members, 1833
Thirteen Historical Discourses
The Goodly Heritage of Connecticut, 1840
Early Constitutional History of Connecticut, 1843
Commemorative Discourse, 1858
Historical Discourse, 1859
Civil Government in New Haven Colony, 1862
The Genesis of the New England Churches, 1874
The Relations of the Congregational Churches of Connecticut to Civil
Government, and to Popular Education and Social Reforms, 1876

God of Our Fathers, to Thy Throne
Hail, Tranquil Hour of Closing Day
Here, Lord of Life and Light, to Thee
How Sweet, Through Long Remembered Years
Land Where the Bones of Our Fathers Are
O God, Beneath Thy Guiding Hand
O God of Abraham, Ever Sure
O Thou Who Hast Died to Redeem Us from Hell
Though Now the Nations Sit Beneath
Wake the Song of Jubilee
Weep Not for the Saint That Ascends

Bud never married, instead he lives with his father just south of Defiance Ohio.
Arranger
Alvin (Bud) Herman Manz in 2000

Bud never married, instead he lives with his father just south of Defiance Ohio.
Notes
L. M.
Lyrics
O, God, beneath Thy guiding hand
Our exiled fathers crossed the sea;
And when they trod the wint'ry strand,
With pray'r and psalm, they worshipped Thee.

To heard'st, well-pleased, the song, the pray'r;
Thy blessings came, and still its pow'r
Shall onward through all ages bear
The mem'ry of that holy hour.

Laws, freedom, truth, and faith in God
Came with those exiles o'er the waves,
And where their pilgrim feet have trod,
The God they trusted guards their graves.

And here Thy name, O, God of love,
Their children's children shall adore,
Till these eternal hills remove,
And spring adorns the earth no more.