What Shall The Harvest Be - 2 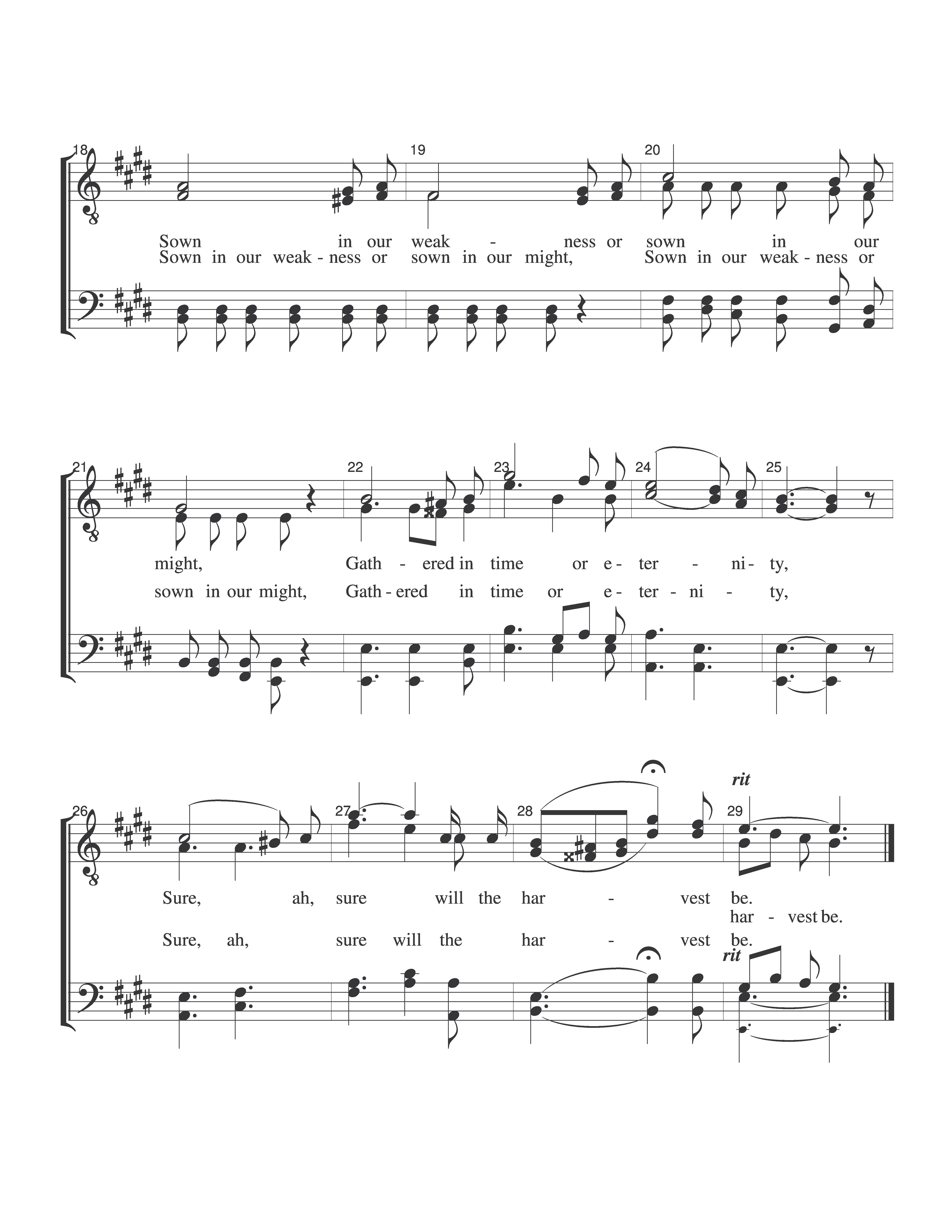 Back to the list
Author
Mrs. Emily S. Oakley

Sorry, we have no information for this author
Composer
Philip Paul Bliss

A fine baritone voice and a handsome presence aided him in his work, and his songs became tremendously popular.

After the publication of his Gospel Songs (1874) he became associated with Dwight L. Moody and joined Ira D. Sankey in producing a series of songbooks called Gospel Hymns, the first of which appeared in 1875.

Among his songs are "Hold the Fort," "Let the Lower Lights Be Burning," and "Jesus Loves Me."

Philip Paul Bliss was born in Clearfield County, PA on 9 July 1838 to the parents of Isaac Bliss (1757-1864) and Lydia Dolittle. He had three sisters: Phoebe, Reliance, and Elizabeth; and one brother: James D. He married on 1 June 1859 to Lucy J. Young and they had two children. He died, in a train wreck with his wife, on 29 December 1876 in Ashtabula, OH, at the age of 38. He occasionally used the pseudonym of Pro Phundo Basso. He was a contemporary of, and fellow Normal Musical Institute singer with, George Frederick Root, Frederic Woodman Root, and Thomas Martin Towne.

His most popular song was Hold the Fort! (1870) which was based on the events of a Civil War battle in October 1864 near Atlanta, GA. He is especially noted for his hymns and character songs.

Among his most popular hymns were I Am So Glad, Daniel's Band, More to Follow, Free From the Law, Whosoever Will, Man of Sorrows, Almost Persuaded, I Know Not the Hour, and Meet Me at the Fountain.

Died: December 29, 1876, Ashtabula, Ohio. Bliss and his wife died in a tragic train wreck caused by a bridge collapse. He survived the initial impact, but went back into the flames in an unsuccessful attempt to rescue his wife.

Burial: The remains retrieved from the Ashtabula disaster were placed in a common grave marked by a cenotaph in the Ashtabula Cemetery. A cenotaph in memory of the Blisses was also erected in the cemetery at Rome, Pennsylvania, July 17, 1877.

Bliss Home
Bliss home in Rome, Pennsylvania;
now the P.P. Bliss Gospel Songwriters’ Museum
A Long Time I Wandered
At the Feet of Jesus
Almost Persuaded
By and By
Calling Now
Come, Brethren, as We March Along
Come, Sing the Gospel’s Joyful Sound
Cut It Down
Dare To Be a Daniel
Do You See the Hebrew Captive Kneeling?
Down Life’s Dark Vale We Wander
Free from the Law
God Is Always Near Me
Hail, Happy Morning
Hallelujah, He Is Risen!
Hallelujah, ’Tis Done!
Hallelujah! What a Savior
Have You on the Lord Believed?
Hear Ye the Glad Good News from Heaven
Hold the Fort
Holy Spirit, The
How Happy Are We
How Much Woes Thou?
I Should Like to Die
I Know He Is Mine
I Know Not the Hour
In Me Ye May Have Peace
In Zion’s Rock Abiding
Jesus Loves Even Me
Let the Lower Lights Be Burning
Light in the Darkness, Day Is at Hand
Light of the World Is Jesus, The
March to the Battlefield
More Holiness Give Me
My Redeemer
No Other Name
O! Jerusalem, the Golden City
On What Foundation Do You Build?
Only an Armor Bearer
Praying Always
Pull for the Shore
Repeat the Story O’er and O’er
Sailing into Port
See the Gentle Shepherd Standing
Seeking to Save
Spirit, O Sinner, In Mercy Doth Move, The
Sword of the Lord, The
There Is Sin in the Camp
There’s a Light in the Valley
This Is the Victory
Though the Way May Sometimes Be Dreary
’Tis Known on Earth and Heave, Too
To Die Is Gain
Wandering Afar from the Dwellings of Men
Weary Gleaner, Whence Comest Thou?
What Wilt Thou Have Me to Do?
When Jesus Comes
When My Weary Hands Are Folded
Where Are the Nine?
Where Hast Thou Gleaned Today?
While the Silvery Moonbeams Fall
Whosoever Will
Will You Meet Me at the Fountain?
Wonderful Words of Life

Bury Thy Sorrow
Come unto Me
Eternity
Hold Fast Till I Come
It Is Well with My Soul
Kenosis
Lift Up, Lift Up Thy Voice
Look Away to Jesus
Lord Jesus, Come
New Song, The
Oh, to Be Nothing
Precious Promise
We’re Going Home Tomorrow
What Shall the Harvest Be?