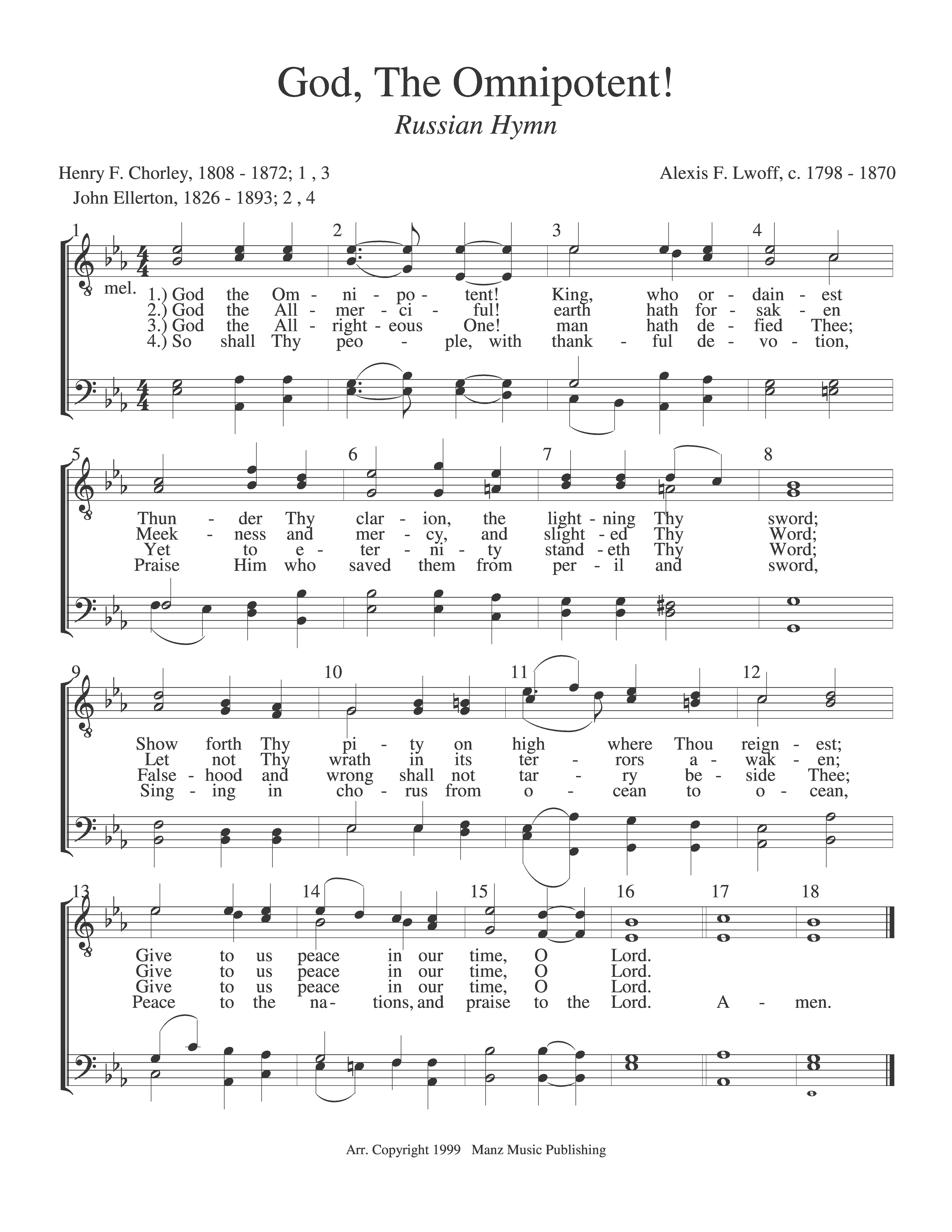 
A Victorian era journalist, Chorley was for many years music critic for the Athenæum in London. He was also a book reviewer, novelist, playwright, and poet. One of his best known pieces was his obituary of Turgenev, mistakenly written while the Russian was still very much alive. Turgenev was not offended by the error nearly as much as he was by the critical opinions of his work expressed in the obituary!

Lvov’s father directed the imperial court chapel in St. Petersburg. After a tour of duty in the Russian army, Alexis took over his father’s post, and stayed in that position 24 years. He composed operas, violin music, and various religious pieces, retiring in 1867 due to deafness.
Arranger
Alvin (Bud) Herman Manz in 1999

Bud never married, instead he lives with his father just south of Defiance Ohio.
Notes
Russian Hymn 11. 10. 11. 9.
Co-Author: John Ellerton  (verses 2 & 4)
Born: December 16, 1826, Clerkenwell, Middlesex, England.
Died: June 15, 1893, Torquay, Devonshire, England.
Buried: Torquay, Devonshire, England.
Ellerton graduated from Trinity College, Cambridge, and entered the ministry in 1850. He served as Vicar at St. Nicholas’, Brighton, and Crewe Green, Cheshire. He was a recognized authority on hymns, contributed to Hymns Ancient and Modern, and wrote or translated over 80 hymns.
Lyrics
God the Omnipotent! King, who ordainest
Thunder Thy clarion, the lightning Thy sword;
Show forth Thy pity on high where Thou reignest;
Give to us peace in our time, O Lord.

God the All-merciful! earth hath forsaken
Meekness and mercy, and slighted Thy Word;
Let not Thy wrath in its terrors awaken;
Give to us peace in our time, O Lord.

God the All-righteous One! man hath defied Thee;
Yet to eternity standeth Thy Word;
Falsehood and wrong shall not tarry beside Thee;
Give to us peace in our time, O Lord.

So shall Thy people, whith thankful devotion,
Praise Him who saved them from peril and sword,
Singing in chorus from ocean to ocean,
Peace to the nations, and praise to the Lord.