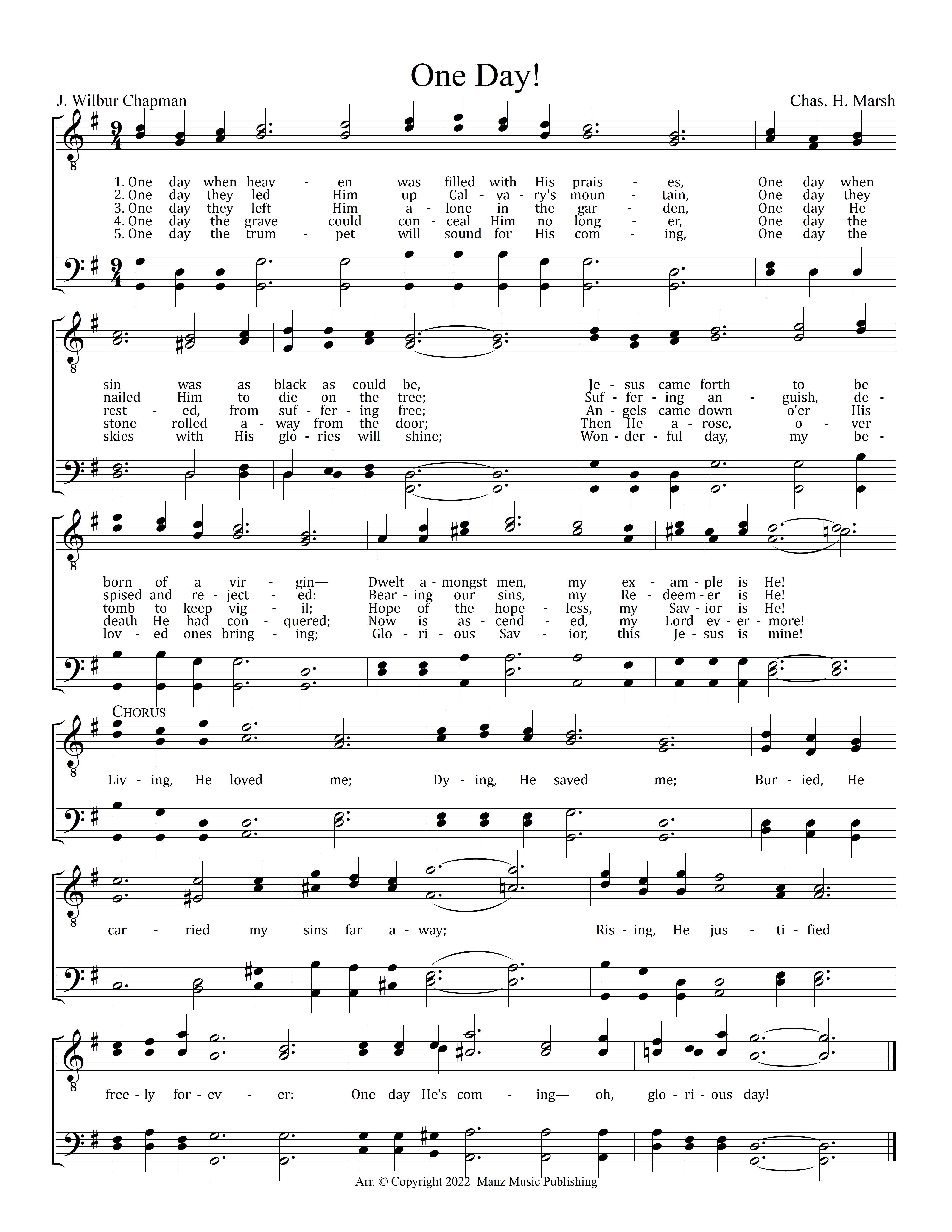 
Chapman graduated from Lake Forest University in 1879 and Lane Seminary, Cincinnati, Ohio, in 1882. Ordained a Presbyterian minister, his first pastorate was split between two churches—in Liberty, Indiana, and College Corner, Ohio. In 1883 he became the minister of the Old Saratoga Dutch Reformed Church in Schuylerville, New York. In 1885, he moved to the First Reformed Church in Albany, New York, and in 1890 to the Bethany Presbyterian Church in Philadelphia, Pennsylvania. He was one of the founders of the Winona Lake Bible Conference and, in 1900, traveled to the Holy Land. His works include:

Jesus, What a Friend for Sinners
One Day
’Tis Jesus

Marsh’s father was pastor of the Congregational Church in Magnolia, Iowa. His gift for the piano was evident at an early age, and after he graduated from high school, Wilbur Chapman asked him to play for the Winona Lake Chautauqua and Bible Conference in Indiana. He later taught at the Bible Institute of Los Angeles (1915-1919) and the University of Redlands (1919-1926). He studied music in France in the 1920’s, and became president of the European School of Music and Art in Fort Wayne, Indiana. From 1928 to 1932, he played the organ at the First Presbyterian Church. In 1932, he moved to Florida to become professor of organ at the University of Florida, Gainesville, and to serve as organist and choir director at the First Baptist Church. In 1935, he moved to California, where he worked as district supervisor for the Federal Music Project in San Diego until 1939. He also played the organ and directed the choir at St. James-by-the-Sea Episcopal Church in La Jolla (1936-1956).

Bud never married, instead he lives with his father just south of Defiance Ohio.
Lyrics
One day when heaven was filled with His praises,
One day when sin was as black as could be,
Jesus came forth to be born of a virgin—
Dwelt amongst men, my example is He!

One day they led Him up Calvary's mountain,
One day they nailed Him to die on the tree;
Suffering anguish, despised and rejected:
Bearing our sins, my Redeemer is He!

One day they left Him alone in the garden,
One day He rested, from suffering free;
Angels came down o'er His tomb to keep vigil;
Hope of the hopeless, my Savior is He!

One day the grave could conceal Him no longer,
One day the stone rolled away from the door;
Then He arose, over death He had conquered;
Now is ascended, my Lord evermore!

One day the trumpet will sound for His coming,
One day the skies with His glories will shine;
Wonderful day, my beloved ones bringing;
Glorious Savior, this Jesus is mine!

Chorus:
Living, He loved me;
Dying, He saved me;
Buried, He carried my sins far away;
Rising, He justified freely forever:
One day He's coming—oh, glorious day!